The clinical practice change we implemented was supposed to be easy.  It was a simplified version of an Enhanced Recovery After Surgery (ERAS) program for patients undergoing bowel surgery. It was implemented in 18 hospitals and involved over 100 surgeons. Two key process steps were identified and tracked. They were early ambulation (patients walked 3 or more times) and early alimentation (patients drank a minimum of 200cc of liquids) on the first day after surgery. Early reports revealed the practice was being slowly adopted across the system. Despite being pleased with the initial results, there seemed to be some resistance among some of our medical staff.

Even with some improvement initially, it was not nearly as much as we anticipated.  Something was impairing our performance, and the finger was promptly pointed at the surgeons.  People said, “Terry, you’re the lead for this initiative.  You have to talk to those surgeons who are fighting this, and convince them to change their ways.”  Instead of talking, I listened.  What I learned was that most of the surgeons already thought they were doing the ERAS program.  They were also perplexed as to why it wasn’t performing as expected.  Finally, one of them made a simple suggestion and it changed everything overnight.  The suggestion was to pre-check the specific orders for ambulation and alimentation in the order sets in our electronic medical record.  Up to this point they were not pre-checked.  So we pre-checked the ambulation and alimentation orders in the post-operative bowel surgery order sets, and that is when things really began change for the better.

Richard Thaler and Cass Sunstein wrote a wonderful book a few years ago titled “Nudge: Improving Decisions About Health, Wealth and Happiness“, which I think does a great job of explaining the concept behind choice architecture.  By pre-checking the order sets with the desired clinical practice change, this made it easier for surgeons to order it.  This simple change improved performance significantly as can be seen in the graph at “Event 1”.  (I will explain Event 2 in a future post.)  We modified the order sets (architecture) to pre-checked and standardized orders for ambulation and alimentation (default choice).  If a surgeon didn’t want their patient to receive these orders, then they had to un-check the orders (judgement choice).  The key thing to remember was the surgeons already bought into the idea of ERAS; they just needed to be reminded at the time the orders were being placed.  We reported this study in the Journal for Healthcare Quality.  This simple step led to a 30% decrease in gastrointestinal complications, 34% decrease in pulmonary complications and a 17.5% decrease in readmissions.  Physicians really do want to do the right thing.  Sometimes they just need to be nudged. 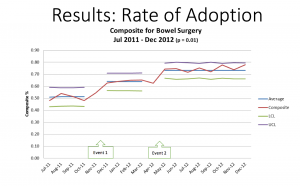