One of the greatest challenges in healthcare today is aligning the goals of physicians with that of the hospital administration.  There isn’t a member of the hospital C-Suite or Medical Staff who hasn’t tried to tackle this challenge.  So what is it about those who succeed that is different from those who fail at alignment?  What’s their secret?

A few years ago the healthcare system I worked for was rolling out a systemwide clinical initiative in Surgery.  As its physician lead, I was charged with assuring its success.  The good news was, we had success with its adoption by our Surgical Staff across the system.  Unfortunately, not every Surgeon was an early adopter or even a late adopter.  What made it even more challenging was that one of our busiest groups was not adopting the clinical practice change at all.  I knew the group and had a good relationship with them.  One evening I had a chance encounter with the group’s lead.  I asked him why the group was not adopting the clinical practice change, and he responded by asking me, “Why is it that you (C-Suite representative for the hospital) are always asking us to do something for you?”  It hit me hard.  As a CMO, I never thought of it that way.  I wanted to immediately defend our request by explaining how it will improve patient care, but I didn’t.  For some reason, I asked him what he wanted.  He thought for a second, and said he wanted his group to be the go-to group in the region.  I told him that we should meet again to talk about how we could help him accomplish that goal.  We knew each other before this encounter, but that became the start of a different type of professional relationship for us.  I wanted our system initiative to succeed and he wanted his group to succeed as the go-to group.  While these were very different end goals they had a common theme.

In order for physicians and hospital administration to align, there must be a common theme.  It starts by first knowing what each other wants and that starts with trust.  I met with the group’s lead again and this time I reviewed some data with him on his group’s performance.  We identified a few areas for improvement, and I showed him how clinical performance improvement could be a great way to market his group.  We met again with the other members of his group, and worked with them to make a few changes in their clinical practice.  Their performance was tracked in a risk-adjusted manner and bench-marked nationally.  To make a long story short, not only did their performance improve, but their referrals and number of operative cases increased.  They are now the go-to group in that region, and our strategic initiative shattered the system’s stretch target two years in a row.  When done correctly, alignment should always result in a win-win for the Medical Staff and the Hospital.  The best part of this story, patient care improved for both the hospital and the system.  Now that is alignment! 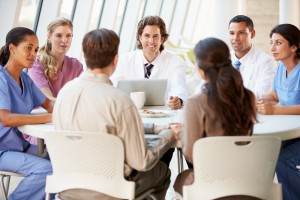