How To Complain So That Others Will Listen

“Don’t waste too much time with this one Terry.  It’s just another doctor with nothing better to do than complain.”  This was the advice I received, along with a long list of forwarded emails that found its final resting spot in my Inbox.  It was a complaint regarding a recent change our system made in a practice affecting the operating room.  After reading through the emails I could see why it kept getting forwarded to someone else.  Its tone was harsh and critical in the beginning. By the time I finished reading the email I realized there was something different about this complaint.  The author of the email stated something I wish more people with complaints would do.  When I read it, I knew I had to talk to this physician and listen to him.  The only thing I would change is, I wish he would have stated it at the start of the email and not at the end.  If he did, then more people would have read it.

If you must complain, then do so with a spirit of engagement.  The next time you talk to your boss and want to complain about something, don’t forget to bring a solution at the start of the conversation.  It may not be the solution that gets implemented, but at least you are signaling that you are invested in the same goal, which is to resolve a problem.  When others are complaining to you, filter out the noise and listen for the signals of engagement.  It makes it much easier to listen to a complaint and more likely for you to identify and build support for an alternative solution to a problem. 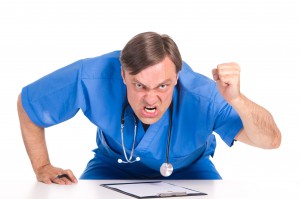