Robotic Surgery and the Smartphone

Recently I was cleaning out a closet and found a box of old cell phones. Each one was an upgrade in technology and each one was a reminder of how quickly technology can progress. The collection of cell phones ranged from the Motorola StarTac to a “vintage” Razr. The latest edition to the collection is an iPhone 4 which was replaced with the iPhone 5. The StarTac was once considered one of the 50 greatest gadgets in the last 50 years. Compared to the latest generation of smartphones, it pales in functionality.

There were multiple reasons why this happened, but there were three leaps in technological enhancement that help to explain this. It comes down to markedly improved capabilities in processing, networking and apps. Data processing on laptops alone has increased 1000 fold in the last 20 years and continues to improve. By 2020 it is predicted that handheld devices will be capable of several 100 Gigaflops (GFLOP), which can be 100 times faster than current home computers. In addition, the cost per GFLOP has plummeted from $640/GFLOP in May 2000 to just 22 cents in June 2013. So what does this have to do with robotic surgery?

In a June 2013 Medscape interview, Dr. Joseph Colella, the Director of Robotic Surgery at the University of Pittsburgh Medical Center commented that one of the advantages of robotic surgery is, it is a computer technology. We are placing a computer, in the form of a robot, between a Surgeon’s hands and the patient. As advanced as that technology seems today, it will pale in comparison to what we will see in the coming years. Imagine the possibilities when that computer’s capabilities in processing, networking and applications is massively increased. We witnessed it with cell phones over the last two decades and we will likely see it in robotic surgery.

In a July 2013 Medscape interview, Dr. J. Kellogg Parsons from the University of California at San Diego pointed out that the benefit is dependent on the procedure and the patient population. While it still remains to be seen what procedures make the best use of robotics and which population of patients benefit the most from its use, this will become more obvious with time, just as we saw with the evolution of laparoscopic surgery. Cost will need to decrease and this will likely happen with reduced costs of the technology and competition. It’s hard to believe but we may one day be comparing current robots used in surgery to the old “brick” cell phone. BTW, the brick cost $3,995 when it premiered. With a two year contract the iPhone 5 cost $199. Yes, it can happen. 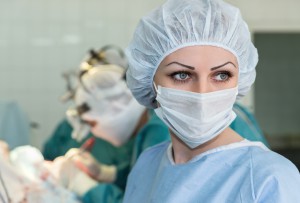