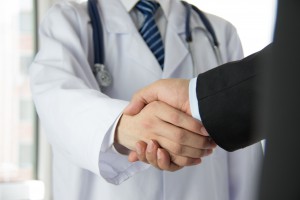 We were at a Department of Surgery meeting and the next agenda item called for a report from one of our administrative managers. Sixty seconds into the report I could tell this was not going well. The surgeons were getting restless and the Chair was motioning to everyone to settle down. What could possibly be said in under a minute that could so enrage this group. In that short time span, the words or phrases “compliance”, “mandatory”, “Joint Commission” and “audits” were somehow use in the very first sentence the manager uttered. While these words may seem routine to someone from the hospital administration, they tend to derail many physicians and especially surgeons. This is not the best way to start a conversation. Whatever message the manager meant to communicate was completely lost on this group.  As it turns out the manager was attempting to report some good news.  If it is good news, then start by saying, “I have some good news.”

Rule #1: If you want physician engagement, then avoid beginning conversations with behaviors and language that are known to disengage them.

We were working with several vendors on an important supply contract.  One of the vendors decided to insist on completely unreasonable terms.  Before we answered their request for these terms, we met with the surgeons who would be impacted by the loss of this vendor.  We explained our side of the negotiation.  While they were not happy with the potential impact of these negotiations, they understood why we needed to take a stand.  In the end, the vendor walked away without a contract, and we worked with the surgeons to bring in an acceptable alternative product.  Instead of just making a decision without the surgeons, proactively mitigating the effects of the system’s actions bought a small slice of trust with an influential stakeholder group.

Rule #2: If you want physician engagement, then mitigate the effects of unavoidable actions that are considered disengaging to physicians.

We were in the early phase of developing a Robotics Program for our system and wanted to pull together a group of surgeons who did robotic assisted surgery. We wanted broad representation, and people who were passionate about the technology. There is a fairly simple way to identify these people. We ran a usage list. We identified all the surgeons who performed robotic assisted surgery along with their specialty, number of cases, type of cases, years with robotics privileges and outcomes. By doing so, we had a list of our busiest surgeons with the best outcomes. We told them we were interested in developing a system robotics team focused on improving outcomes, and asked them if they had any interest in this group. Guess what? They were very interested in joining this group. Why? Because they were already engaged in the topics of improving outcomes and robotics and wanted to learn more. Imagine that, instant physician engagement.

Rule number 3: If you want physician engagement, then start with what they are already engaged in doing.

We were implementing an enhanced recovery after surgery program for bowel surgery across our system, and trying to determine if there was any support for the program. The surgeons were aware of the evidence, and thought they were doing it as best they could. Unfortunately, the actual performance and outcomes were not matching this expectation. When we implemented the program we built decision support into the order sets and created a tracking board of these patients to make the individual patients’ performance more visible. As we reported, not only did the performance of the key steps of the program improve significantly, but is was also associated with a significant improvement in complications and readmission rates.

Rule #4: If you want physician engagement, then help them solve a problem they are already attempting to solve.

For ten years in a row we endured continuous price increases in a particular product category. So we ran a usage list for this product, and pulled together a group of surgeons with the greatest use. What was particularly troubling about this product was the hospitals lost money every time this product was used. The amount was substantial and was creating a risk for the service line. We were at the breaking point, and were not going to be able to support this product and the surgeons anymore to the degree we did in the past. There were a lot of alternative plans discussed, but we wanted to know what the surgeons thought. They were appalled. They were also unaware this whole time how much the product cost, and that the hospitals were losing money every time it was used. With the support of the surgeons, we approached the vendors regarding a significant price decrease. Initially the vendors were not interested and wanted another price increase. They appealed to the surgeons for support. The surgeons would not support the vendors, and we ended up with the price decrease we needed to sustain the program.

Rule #5: If you want physician engagement, then appeal to their sense of fairness and what is right for the sustainability of their their practice, their service line or even the hospital in which they work.

A few years ago we had a debate regarding reprocessing at one of our surgery meetings.  There was a great deal of heated discussion regarding reprocessed supplies and the consensus among the surgeons was that reprocessed (RP) supplies were defective more frequently than original equipment manufacturer (OEM) supplies. This was a testable hypothesis, so we tracked the surgeon reported defect rates for single use energy devices. What we discovered and reported, was that the OEM defect rate was 4.9X greater than the RP defect rate for energy devices. Our reprocessing usage rate improved dramatically after this announcement as well as the associated supply cost savings.

Rule #6: If you want physician engagement, then appeal to their interest and passion for science.

While costs in healthcare are complicated, they are not too complicated to be understood by physicians. It just takes time and an interest to learn. We provided a group of General Surgeons with their average cost per case for laparoscopic cholecystectomy. This alone, was insufficient to impact any change in their average cost. In a blinded fashion, we then showed them their average cost per case compared to their peers. Something in them changed. They were now very interested in cost. At one point, surgeons were now debating over who had the lowest cost per case. Over the next several months the group reconciled the differences on their supply usage. They ultimately developed one single, low cost, preference card for the group. The group now sees themselves as the high value (high quality, low cost) alternative and markets themselves to payers as such.

Rule #7: If you want physician engagement, then appeal to their competitive spirit.

Our team just completed the implementation of a new clinical practice across our healthcare system, which was based on work from our Surgery Clinical Consensus Group.  A number of surgeons were not completely supportive of the clinical practice change.  One in particular was very outspoken.  We invited him to a consensus group meeting to discuss the topic.  He presented his concerns.  He was so passionate about this particular topic; we asked him to draft a modification to the clinical practice, and demonstrate he had support for the changes.  He did it, and we implemented the new changes.  It was so well received among the medical and nursing staff we had essentially 100% compliance with the new practice overnight.

Rule #8: If you want physician engagement, then empower them to create their own solutions.

Just as I was leaving work to go on vacation, I received a call from a very irate surgeon. He was upset and he needed to talk to someone from the administration. I was the Chief Medical Officer, so I was used to these types of calls. This one was a little different. He spent the first half of our hour long conversation dropping just about every imaginable f-bomb you can hear. He was so loud and upset, I had to hold the phone away from my ear. During this time, I was occasionally scribbling notes on a post-it note. The last half hour of our conversation was more amicable. When I returned a week later there was a stack of letters, memos and reports I needed to review along with the other duties of my role. Along with this, I found a yellow post-it note with a couple of ideas written on it. When I first read them, I thought, “these are some good ideas, why didn’t’ I think of them sooner”. Just then it hit me. These were the scribbled notes I wrote when listening to the irate surgeon during the prior week.  Buried beneath his anger, disappointment, negativity and multiple f- bombs were a couple of good ideas. Even though he was extremely upset, his ideas were what he was really trying to communicate. His passion was obscuring the real contribution. There are going to be times when you have to filter what you are experiencing when confronted with very passionate and angry staff. Beneath that passion you could very well discover some great ideas and very engaged physicians.

Rule #9: If you want physician engagement, then listen to them when they are upset, because they are already maximally engaged, and may be harboring great ideas worth considering.

In Rule #1 on disengagement, I mentioned the example of the manager who approached the Department of Surgery with disengaging verbiage such as “compliance” and “mandatory. What if the manager approached the group differently? For example, what if the conversation went like this?  “Thank you for allowing me to present an update from the quality department. We have some great news to report. As you are all aware there is a relationship between lower hospital acquired infections and hand washing. We studied our hand washing rates and we’re happy to report there is a significant increase in hand washing for the facility. We think it has to do with the addition of new gel dispensers available outside patient rooms.  We appreciate that so many of you are using these when you ‘gel in’ and ‘gel out’ as you round on your patients. This should go a long way to improving our infection rate.” See the difference. In the first description the disengaging verbiage dominates the presentation. In the second description, the engaging verbiage dominates the presentation. Focusing on the positive and including language consistent with the values of the audience is more likely to have a favorable impression and create engagement.

Rule #10: If you want physician engagement, then communicate with words that positively reflects the things they value.

This is an excerpt from the, just published, second book in the Seven Pillars Series by Dr. Terry Loftus, titled The Value Analysis Program: A How-to-Guide for Physician Leaders on Starting Up a Successful Program. To learn more about this book click on this link or check the “Books” tab above.